The patient is an 87-year-old female who presented with a history of constipation and bothersome rectal prolapse that required manual rectal prolapse reduction. On exam, she was found to have full-thickness rectal prolapse and stage II posterior vaginal wall pelvic organ prolapse. She desired definitive surgical management of her prolapse and opted for a laparoscopic suture rectopexy and posterior vaginal wall repair and perineorrhaphy. She had anorectal physiology and urodynamic testing, as well as a defecography before surgery to assist with surgical planning. The surgery was uncomplicated. She was discharged on postoperative day one and her postoperative recovery was unremarkable.

The patient is an 87-year-old female with a past medical history significant for irritable bowel syndrome with constipation who presented with symptoms of constipation refractory to dietary changes and bothersome rectal bulging that required manual reduction. She denied urinary incontinence. She is nulliparous and not sexually active.

On exam, her abdomen was soft, nondistended, and nontender without any evidence of hernias. She had a well-healed vertical midline skin incision. On pelvic exam, with Valsalva, the posterior vaginal wall descended 1 cm beyond the hymen. On rectovaginal exam, she had a rectovaginal pocket. Finally, while sitting on the commode, she was found to have full-thickness rectal prolapse with straining, as well as a patulous anus at rest.

The patient underwent defecography, and the results can be seen in Figure 1. 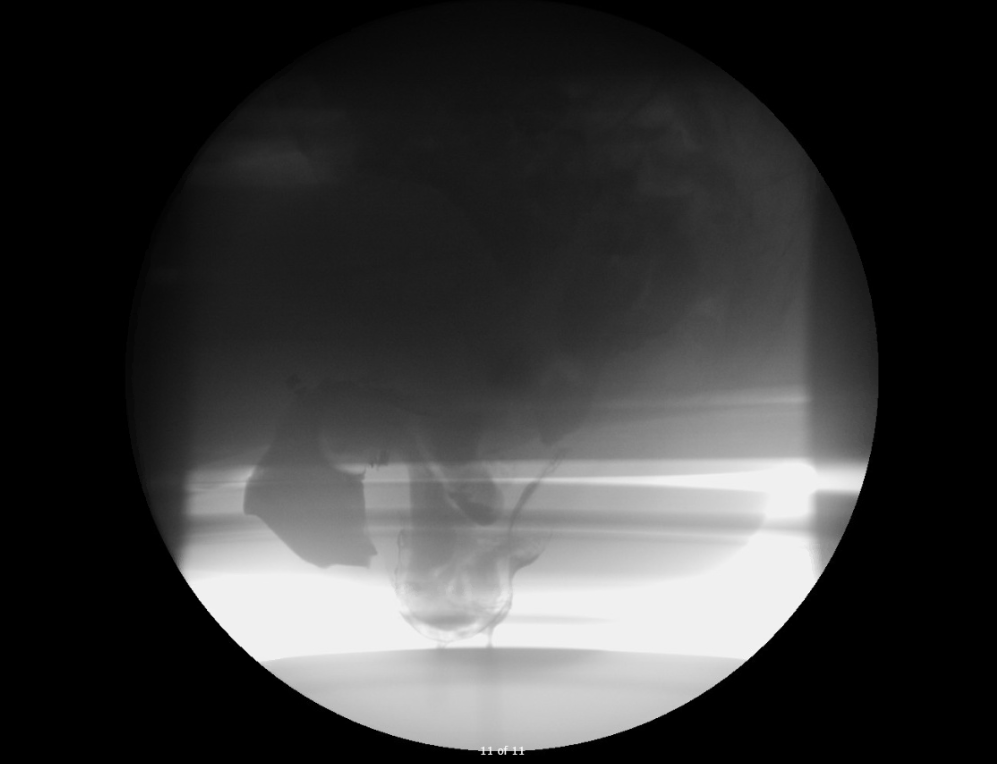 Figure 1. Defecography Results
Full-thickness rectorectal intussusception with rectal prolapse.
Subsequent intussusception of an enterocele into the rectum and the vagina.

On defecography, there was a rectal prolapse with an enterocele prolapsing into the rectum and the vagina.

Surgical options for the treatment of rectal prolapse include:

The American Society of Colon and Rectal Surgeons recommends abdominal procedures such as rectal fixation in otherwise healthy patients.4 Perineal approaches should be reserved for patients with pre-existing comorbidities and where minimizing the procedure morbidity is desired.

Despite surgical repair, functional problems such as constipation may persist.1, 3 Choice of procedure can also worsen function in some patients by precipitating fecal incontinence (after a bowel resection) or constipation (after denervation of the pelvic floor).

As many as 3% of women in the US report to have some form of pelvic organ prolapse,1 and rectal prolapse affects 1% of adults above 65 years of age.5

There are anatomical features that have been described to be associated with rectal prolapse such as a redundant sigmoid colon, diastasis of the levator ani, deep cul-de-sac, and lack of normal fixation of the rectum, giving rise to an exceptionally hypermobile mesorectum and laxity of the lateral ligaments. The goal of surgery is to restore anatomy and to address these features.

For this patient, because anorectal manometry showed low sphincter tone at rest and with squeeze, it was felt that these low pressures put her at risk of developing fecal incontinence with any surgery requiring bowel resection. This led to the decision to offer a rectopexy without resection instead of resection rectopexy.

Given the findings of enterocele on her defecography, we discussed the best ways to address it at the time of surgery. The option of culdoplasty versus a ventral mesh rectopexy was discussed. Ultimately, it was determined that, given the fact that the posterior wall of the vagina was well suspended, she would probably do very well with a native repair such as a culdoplasty, and that mesh could be performed should there be a future recurrence.

After evaluation and counseling, this patient opted to have a surgical procedure.

The patient was taken to the operating room where general anesthesia with an endotracheal tube was obtained. An oral gastric tube was placed. She received subcutaneous heparin for venous thromboembolism prophylaxis and intravenous cefazolin and metronidazole for antibiotic prophylaxis. She was placed in the dorsal lithotomy position in Yellow-Fin stirrups. An indwelling Foley catheter was placed in the bladder and the bladder was drained.

Entry into the abdomen was performed under direct vision using the Hasson technique. Once abdominal entry was confirmed, the abdomen was insufflated with CO2. An abdominal survey was performed, and there was noted to be a deep pouch of Douglas, normal small and large bowel, as well as normal uterus and adnexa. Three additional laparoscopic ports were placed under direct visualization: a 10-mm port in the right lower quadrant, a 5-mm port in the right upper quadrant, and a 5-mm port in the left lower quadrant. The rectal prolapse was reduced. Once the presacral anatomy was identified at the level of S1, the sacral promontory was cleared with the Harmonic device. Using the Harmonic, the rectum was freed from its sacral and lateral attachments down to the levators, with careful attention to transect the right lateral stalk of the rectum while preserving the left to maintain some of the innervation to the rectum. The deep pouch of Douglas was opened at the most distal end, and the anterior rectum was separated from the vagina to the perineal body.

Once the suture rectopexy was completed, attention was turned to the laparoscopic culdoplasty. Using the previously placed laparoscopic ports, 3-0 V-Loc barbed sutures were placed. The peritoneum overlying the anterior rectum and pelvic side wall was approximated, thus obliterating the posterior cul-de-sac.

Cystoscopy was then performed, notable for strong bilateral ureteral jets and normal bladder mucosa without evidence of stones, lesions, or foreign objects.

Once the laparoscopic procedure was completed, attention was then turned to the posterior repair and extended perineorrhaphy to address the posterior vaginal wall prolapse. The posterior fourchette was grasped on both sides with Allis clamps. The area of anticipated dissection was then injected with 0.25% Marcaine with epinephrine. A diamond-shaped incision was then made over the perineal body skin and posterior vaginal epithelium. The skin overlying the perineal body and posterior vaginal epithelium was excised. The perineal body was dissected sharply from the rectovaginal septum. The midline vaginal incision was then made from the perineum to the proximal border of the rectocele. The vaginal epithelium was then dissected off the underlying rectovaginal connective tissue. Using a finger placed in the rectum for guidance, the rectovaginal fibromuscular layer was imbricated using 2-0 PDS II (Polydioxanone) in a running fashion. An additional layer was placed for reinforcement. Excellent support of the posterior vaginal wall was thus achieved, and the excess vaginal epithelium was trimmed. The perineal body was reattached to the rectovaginal fascia and recreated using a series of crown stitches of 0 Vicryl (Polyglactin 910). The midline incision was then closed in a running fashion using 2-0 Vicryl (Polyglactin 910). The perineum was closed with submucosal and subcutaneous sutures. Rectal injury was excluded with a digital rectal exam following the repair.

The patient underwent a backfill voiding trial on postoperative day one. The bladder was filled via the Foley catheter with 300 ml of sterile water. The Foley catheter was removed, and the patient was able to void more than 200 ml, thereby passing the voiding trial. Subsequently, she met all discharge criteria and was discharged home on postoperative day one after an unremarkable hospital stay.

To maintain access: please let your librarian know you would like a subscription or send us an email at subscribe@jomi.com and we will forward your feedback to your librarian.