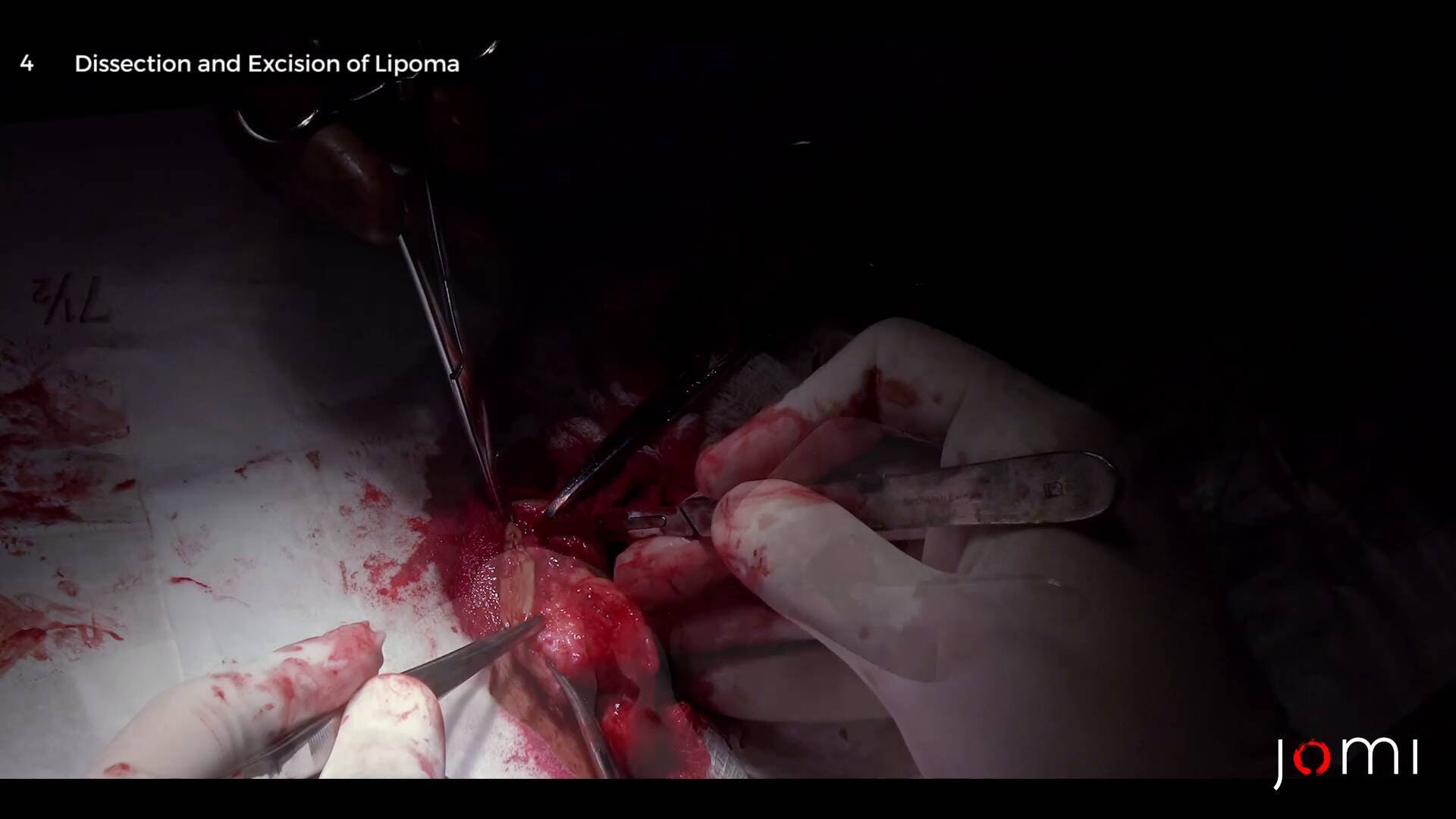 Lipomas are slow-growing lumps that occur as a result of overgrowth of fat cells. They present as doughy, moveable, and non-tender lumps usually found underneath the skin; however, they may occasionally be deeper. Lipomas occur in 1 in every 1,000 people and commonly grow on the upper back, shoulders, and abdomen. In most cases, lipomas are painless unless they affect joints, nerves, or blood vessels. A physical examination is the easiest way to diagnose a lipoma; however, imaging studies and biopsy may aid in the diagnosis when they are large, have unusual features, or appear deep. No treatment is usually necessary for a lipoma; however, if a lipoma is painful or growing, removal may be recommended by excision or liposuction. Here, we present a 35-year-old male who has a large and deep 8-year-old lipoma on his upper back. The lipoma was excised and sent for biopsy.

Lipomas are a type of benign tumor associated with adipocytes in soft tissue that generally grow slowly1 and appear surrounded by a fibrous capsule on histology.2 They are most commonly found in the subcutaneous tissues in the head, neck or shoulder region of the body. 2 The prevalence of lipomas is roughly 1% of the population,2 making them one of the most common neoplasms seen in patients throughout the world. The incidence of lipomas is higher in males than in females; however, the difference is minor. 3Lipomas can develop at any age, but most commonly develop in middle adulthood.3 Fortunately, lipomas carry an excellent prognosis and do not transform into liposarcomas,9 which have an estimated incidence of less than 15 per 100,000 individuals.10 One should be suspicious if multiple lipomas are found during the physical exam, as it may be an early manifestation of certain diseases such as Cowden syndrome or Gardner syndrome,3 where lipomas as well as malignancies are both expressions of the underlying pathophysiology. Surgical intervention is most often initiated by patient request for aesthetic preferences; nevertheless, in rare cases, they can present in unusual forms that affect muscles, nerves and joints.2

Focused History of the Patient

This 35-year-old male patient presented with a large lipoma on his right upper back that began growing 8 years prior. There were no known allergies or contraindications.

Physical examination revealed a healthy-appearing, well-nourished adult male. A soft, unilateral, palpable mass was located on the patient’s right upper back. No loss of function or range of motion was noted.

Typically, no imaging is required for excision of subcutaneous lipomas.4 If available, an MRI scan can prove useful in viewing the size of the mass as well as identifying compression of adjacent structures by the lipoma itself.

The specific pathophysiology of lipomas varies; however it has been determined that nearly two-thirds are caused by mutations in chromosome 12.3 As they grow, fibrous capsules surround the tumors. The prognosis for benign lipomas is considered good, as they generally do not return once excised.2

Typically, lipomas may be left untreated. 3The patient may request excision for aesthetic reasons. In rare cases, lipomas can be problematic when they grow to a size that compresses nerves or vessels, limits function, or otherwise negatively affects a person’s lifestyle. 8

No special considerations were considered for this patient.

The procedure started with injection of a local anesthetic to the area where the lipoma was located while the patient lay prone. Standard regional anesthesia with 1% lidocaine is used for lipoma excisions. If the lipomas are larger, 1% lidocaine with epinephrine may be warranted. This anesthetic technique is also required if electrocauterization is to be utilized to control bleeding, as seen in this case.

An elliptical incision was made so as to excise the tumor and separate the fibrous capsule that encases the tumor from the surrounding tissue. Elliptical incisions are beneficial in cases such as this, as this technique minimizes the amount of skin that needs to be taken during the procedure. Additional anesthetic was required once the deep half of the tumor was reached, attributable to the size the tumor had grown to over the previous 8 years. This type of lipoma was unique in that the fibrous capsule had a stronger adherence to the surrounding tissue than that of a normal lipoma. Blunt dissection could be used towards the inferior portion of the lipoma; however, the majority of the dissection required use of a scalpel. Electrocauterization was used to control bleeds from smaller vessels, while internal sutures were required to close off the cavity to prevent the formation of a seroma.

As shown in the video, the patient was able to be discharged the same day at the procedure. As stated in the video, the patient noticed the tumor in the past, but has a busy life with his job and was able to live with the tumor for 8 years. This supports the literature on lipomas to the effect that, most of the time, lipomas are non-life threatening and are removed by request of the patient, likely for cosmetic purposes.3 Given the patient’s age, there was no concern for post-operative bleeding.

No specialized equipment was used in this case.

All funding sources and other non-author contributors may be acknowledged here.

4. Dissection and Excision of Lipoma

Here's the mass. It's pretty big. It feels firm. So here, I can see- I could hold it down here. See that's how long it is. And I could feel it here. So it feels like it's pretty deep. It's not that superficial. So I might have to go a little deeper, it's pretty big in there.

So I’ll start the incision. I'll start from here until here because I can feel it's a big mass. Okay. I’ll still do an elliptical incision from here. Like this. So it'll be easier for me to oppose the edges.

He's feeling some pain. It’s a little deep so we're going a little deeper. Just adding some more anesthesia. It seems like a deep lipoma. We're already getting part of the Lipoma. It seems like a deep… Here's some bleeders on the side, so I'm just going to clamp that. So this is a huge lipoma, underneath. We see a bit popping out already. He's had it for 8 years. It's benign, yeah. So you'll have a Mosquito here for that. So you'll have different kinds of lipomas. So this Lipoma has been here for 8 years, so it's a little more adhered to the tissues as compared to some lipomas which are superficial and easy to remove once you enter its capsule, easy. But this one, since it's been here for a couple of years, sometimes it's more difficult to remove. Okay. I'm almost getting the whole thing. You can see a little popping out already. So it's important to get the plane. Once you see a plane, you just follow it, just to avoid… So I almost got- I already got the inferior part. So here… Sometimes you can use your finger for blunt dissection. So I think we've got this portion. I'll just release this one. So it’s a little bloodier than the others. So I removed the lipoma.

So I just apply the clamp again on that bleeder. Most likely we'll get that bleeder once we start suturing. So here you could see the defect where the mass came from. It’s pretty deep. So from the edges again, it seems like we got everything. So normally, generally it's a young patient. I would say just keeping pressure, the bleeding will stop, and, we just start closing the wound, adding internal sutures, just to control the bleeders inside.

So I'm suturing, I'm getting internal… 3-0. Zero? 3-0. So it’s important that you get the tissues underneath, to close that cavity out. That will decrease the chances of a seroma formation. Important first to always ask the- the history of the patient, if he's taking any, any anticoagulants, any other medicines. So this is relatively young patient- 30, 35-year-old patient. So I'm not too worried about significant postoperative bleeding. So for other patients who you think will have bleeding, it might be safe to do them in an operating room and not in an outpatient setting.

This case would have been easier if this was done earlier. I think he waited 8 years. So it has grown significantly. And it's in an area where there's a lot of muscle, and it's a, an area where there’s lots of movement, and he also lies down in this area, so tendency is the lipoma, which is normally easier to remove, gets a little adherent to the soft tissues close in the muscles, so it's more difficult to remove. So it would've been better if it was earlier, but location-wise, I think it's, it's okay, safe, no- no major vessels or structures in that area. We are hoping that- there is a chance of recurrence, but we're hoping that recurrence will not happen for this patient. 35-years-old, he had a mass, here. So we took it out, and now he's okay. He's had it for 8 years. He's Philippine Coast Guard? Philippine Coast Guard, staying here in the local island of Sibuyan, Romblon. So he's mentioning that he, he would've had it removed, but he's busy at work. So this is a good opportunity for, as missioners to go to their island, and they- they'll really be able to get good service, and go back home right away, and take care of his wounds, and recover.