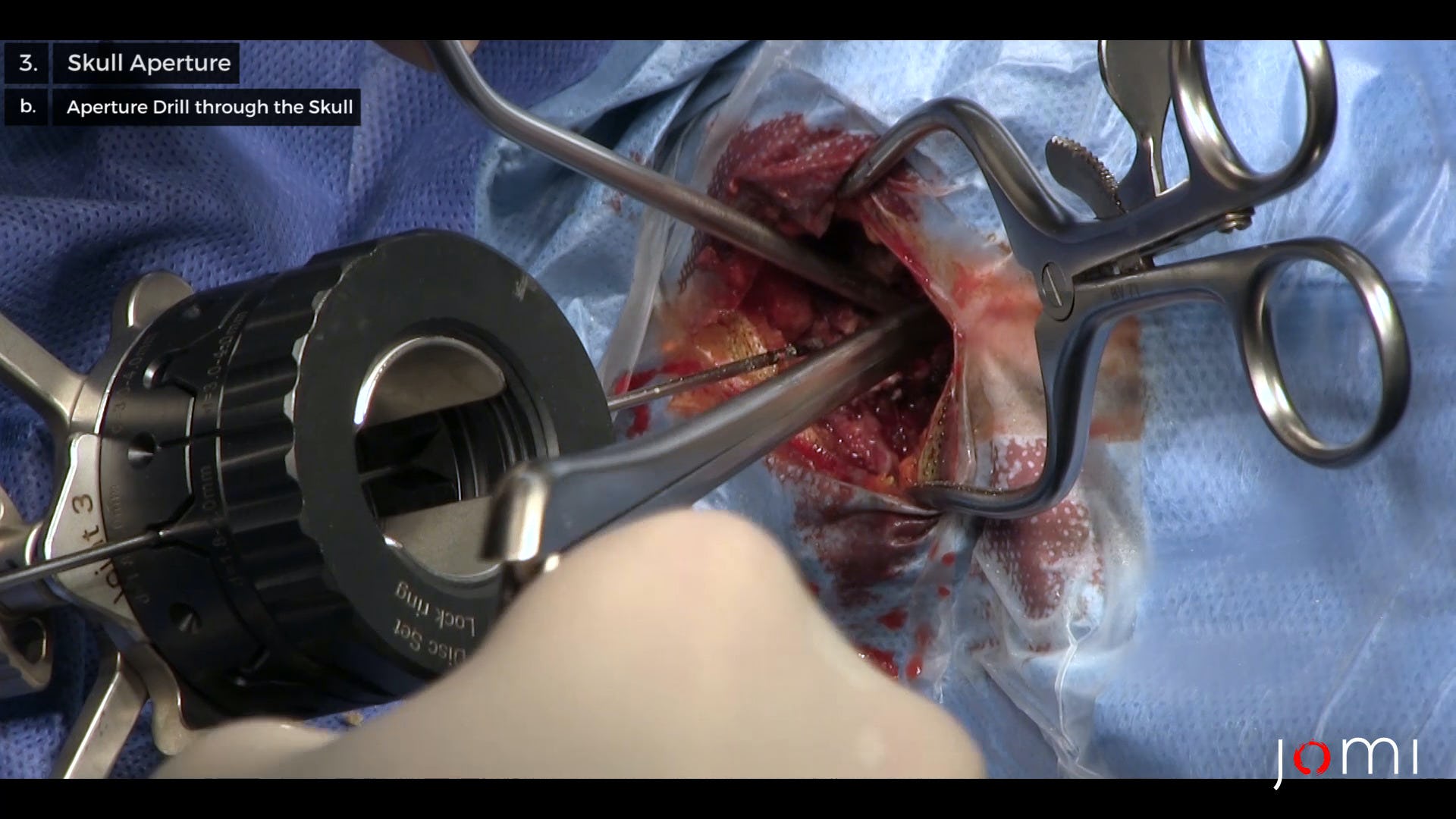 The lesion to be targeted is located adjacent to the fourth ventricle in the cerebellar parenchyma. It is not a brainstem lesion, and it does not involve the cerebellar pedunculi. There is homogenous contrast enhancement in MR imaging and some perifocal edema. No signs of hemorrhage or ischemia were detected.

Focused History of the Patient

The patient has had no severe illnesses so far, and there is no history for malignoma. Only mild arterial hypertension and mild polyneuropathy were apparent. Past immunosuppressive therapies that could augment development of lymphoma were also absent.

This 72-year-old lady developed severe gait ataxia, which was so far unknown to her. There were no other cerebellar signs like dysarthria or intention tremor.

She underwent MR-imaging that showed a homogenous contrast-enhancing lesion adjacent to the fourth ventricle in the cerebellar tissue and moderate perifocal edema (Figure 1-2). Brainstem and cerebellar pedunculi were not involved. No signs of hemorrhage or ischemia were detected. Due to the homogenous contrast enhancement, we suspected CNS-lymphoma. Other possible diagnoses include ischemia, vasculitis, metastasis, glioma, and inflammation. 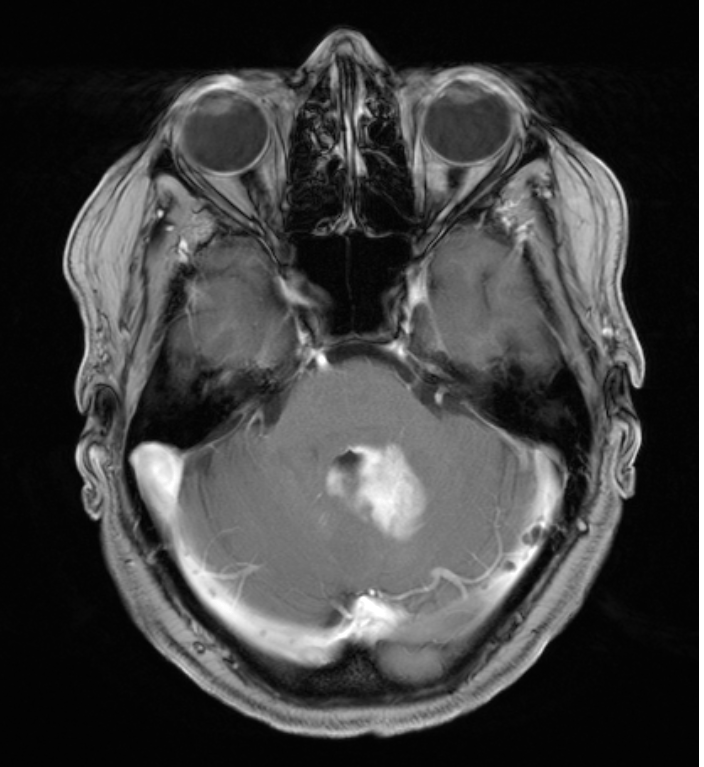 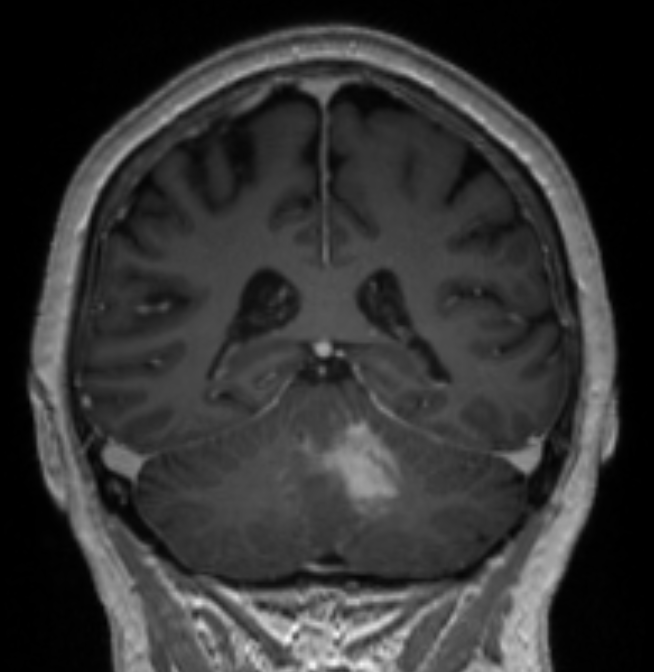 Fig. 1, These gadolinium enhanced T1 weighted images show an infratentorial lesion in the cerebellum and left cerebellar peduncle adjacent to the fourth ventricle. Please note the homogenous contrast enhancement suspicious of CNS lymphoma and missing infiltration of the brain stem.

If untreated, this lesion would ultimately result in occlusive hydrocephalus, coma, and death. If it were to progress in size, cerebellar symptoms would increase (eg, dysarthria, intention tremor, ataxia), and brainstem symptoms are likely to worsen (cranial nerve deficits, eg, difficulties swallowing, paresis, vegetative dysregulation, coma).

Treatment options in cases of lymphoma would include chemotherapy; in glioma or metastasis, radiotherapy may be administered depending on the exact histological finding. Both possible diagnoses will require antineoplastic therapy because both tumor entities show rapid progression if left untreated. Tissue diagnosis is important to prove a tumor entity, provide molecular characterization of the lesion, and allow targeted therapies. Tissue diagnosis would be possible with open transcortical surgery, but this would require longer anesthesia time and a higher risk of cerebrospinal fluid leak and wound healing problems compared to applying a needle biopsy. In cases of lymphoma, it is important that the patient is naive to corticosteroids before obtaining tissue samples because cortisone may prevent adequate tissue diagnosis.

We decided to perform a brain biopsy instead of an open transcortical surgery to test for lymphoma for the reasons given in the above section (Figure 3). Neuronavigation system precision is more accurate in supine position compared to prone position due to improved visibility of face and convexity surface for the navigation camera. We therefore opted for supine position to allow maximal spatial precision in this procedure. Stereotactic biopsy would be more technically difficult due to the frame-based procedure which would require a semi-sitting position and more risk of air embolism. In purely brainstem lesions, rongeur-based stereotactic biopsy would be the more favorable technique, causing less tissue trauma (smaller biopsy needle, but also less sample volume). The floor of the fourth ventricle is to be avoided in surgical procedures due to its critical role in brainstem function. 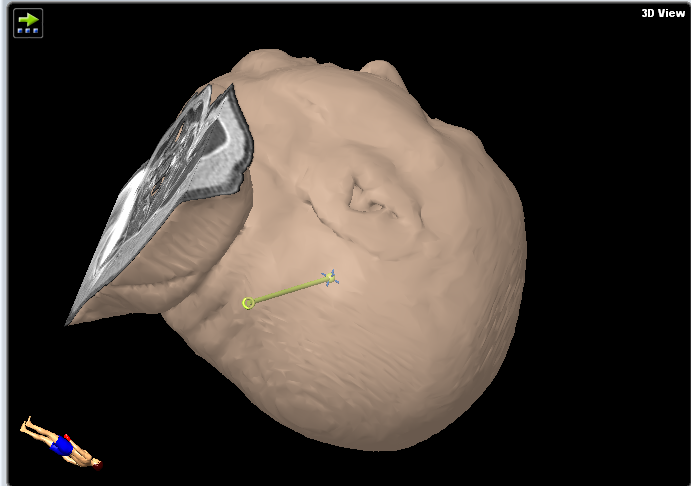 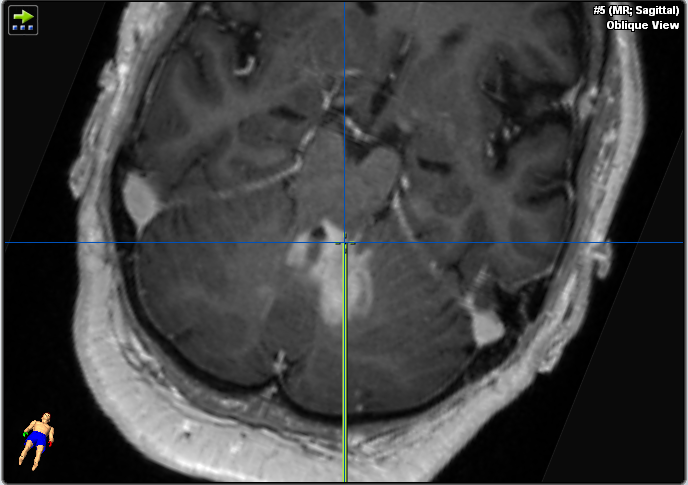 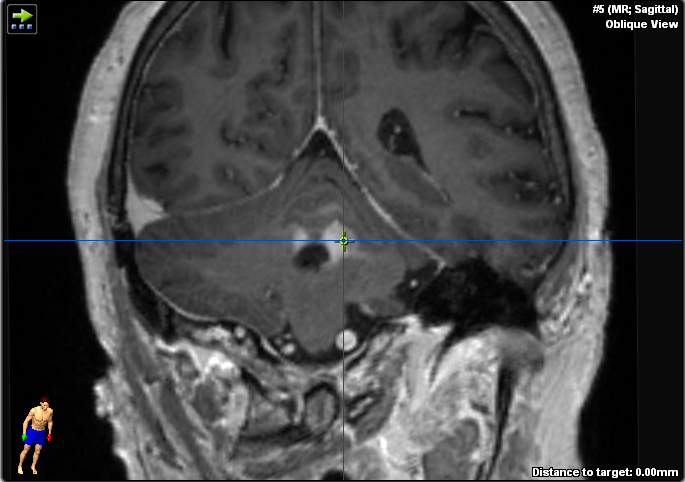 Fig. 3, These images show the plan for the trajectory.

Only few patients do not undergo tissue sampling: these are high-risk patients who are likely to die from the operative procedure or from anesthesia complications (e.g. severe coronary heart disease, septic patients) or patients who will not undergo chemotherapy due to their reduced clinical status.

We show here a procedure to allow minimally invasive histological sampling in a posterior fossa lesion. There is a clear advantage of needle biopsy over an open procedure due to less operative complications such as cerebrospinal fluid leak and wound healing problems.1

Additionally, a needle biopsy can be obtained with the same accuracy and conclusive histological diagnosis rate as a stereotactic biopsy.2,3

Spatial precision of the navigation system is more accurate in supine position because nose, glabella, temples and forehead are more easily accessible and may more easily be detected by the navigation system camera. In prone position, registration of the patient may take longer, requiring more anaesthesia time and may be less precise. Especially in older patients or patients with moderate to high anesthesiological risks, varioguide biopsy allows shorter operation time,4 and less procedural risk for the patient.1

Critical landmarks to be avoided for bleeding complications are transverse sinus, vertebral artery, and posterior inferior cerebellar artery. We therefore chose an entry point well below transverse sinus and well above vertebral artery. Biopsy trajectory should avoid passing the brainstem (too far anterior) or the ventricle and choroid plexus (highly vascularized and increased bleeding risk). Entering the ventricle may also result in obtaining only CSF because no “suction” to the parenchyma may be applied over the self-cutting needle.

Samples from the border zone may later prove the trajectory to be precise and may allow diagnosis of vital tumor e.g. in high grade glioma.6 Samples from the lesion core may indicate necrosis or a need to obtain more samples of the vital tumor. A vital tumor sample is essential for establishing molecular diagnosis to allow targeted therapy.7

Biopsy specimens are examined under a fluorescence light microscope to determine if the samples are from the pathologic tissue. Fluorescing samples resemble regions of disrupted blood-brain barrier and prove that the lesion was truly targeted during biopsy.8 If none of the lesions fluoresce, another biopsy trajectory could easily be added in the same operation.

Histological sampling in this patient ruled out lymphoma and proved non-infectious rhombencephalitis. Treatment for this disease included high-dose cortisone boost therapy that led to symptom relief and improvement of MRI findings. However, the patient later developed relapse of the disease that proved to be refractory to another cortisone therapy. Treatment was therefore changed to plasmapheresis.9

No financial disclosures for any of the authors.

So the case we are operating on is a 72-year-old lady who developed some severe gait ataxia. She has had an MRI which shows this contrast enhancing lesion which is adjacent to the fourth ventricle. And we suspect primary CNS lymphoma, so we opted for a biopsy, which - which will be in navigated frameless biopsy using the brainlab system. And our trajectory, you can see here - around 1 cm below the transverse sinus, so no need to injure that. And then we're going right into the contrast enhancing lesion, and our target will be at the level of the fourth ventricle so we don't hit the brainstem.

That's outside the 5mm target deviation. That's not good.

So now we've set up the biopsy device, and we have an estimated target deviation below 1 mm - so it's pretty accurate. And now we’ll confirm the trajectory using the needle. Good.

So the next step, we’ll do the skin incision and do the burr hole. So in this case, there’s some subcutaneous fat tissue and some of the neck muscles that we have to go through.

So now we’re drilling the bone. So in this case the dura has been perforated while drilling, which is not much of a problem, but it’s not the usual kind of procedure.

So now we have the surface of the cerebellum exposed. I'll coagulate where the needle goes into the tissue, using bipolar coagulation. So now, you see the needle in a trajectory. The - the pink - the pink square is the place where the biopsy is being taken. So now we insert the needle, you go forward, just a little. And now we're approaching the contrast enhancing tissue. You can see it in the upper right image. So we stop here, and then we took the first - take the first biopsy here.

So here we have our first specimen.

So now we're going a little bit deeper into - right into the lesion. Our philosophy is to biopsy the margin from normal tissue to the lesion and then do a biopsy within the lesion, and maybe we can have some macroscopic changes already, so we know that we are in the right place. So the second specimen looks a little different but...

Okay, so now, we are going a little deeper right into the lesion. Now we're right in the center. So here we don't have a sample. We’ll try to get one again. So here's the next sample, which looks a little - little different from the previous one. So we’ll take the last biopsy here, and then we - then we won't go any deeper, and on the way back, we’ll get some more specimens. Go out a little. Sample number 4. Now we go back a little more, and do two or three more biopsies, and then we're done. Sample number 6.

So this - this sample looks a little more translucent than normal brain tissue, so we can be quite sure that it's pathological tissue that we obtained.

Okay now we're going for the last biopsy. This looks more like normal tissue, so this tells us that the navigation is right, and we were most probably in the right spot.

Okay so the last step is to do some irrigation. If there was any bleeding, then the water drops would leak out of the needle, so if nothing happens, we can be quite sure there is no hemorrhage in the biopsy spot.

So this sample for example shows some fluorescence here, so we know we’re - we've been inside the contrast enhancing tissue. Let's take a look at one of the samples right from the center. So this is sample number 5, which is right from the center of the lesion, and it shows some fluorescence, so here we also know we're inside the contrast enhancing tissue.

As you have seen, we had an uneventful surgery - no signs for bleeding. The patient woke up very well, is going to the postanesthesialogical care unit for 2 hours, and then going back to the normal ward. As you've seen, we've experienced them some minor troubles because her shoulder was in the way of the camera for the navigation system. So we always had to push down the shoulders, so the camera was able to to detect all the navigation markers and the - the biopsy needle.